The Maslow CNC is a unique wood milling machine with regards to both design and functionality. There’s no work table like in gantry-style CNC machines. Instead, the machine is tilted 90 degrees hence the work area sits vertically.  The motion system is unique too since it uses a chain drive system rather than the usual lead screw or belt drive system.

It seems quite effective when it comes to performance. It’s able to deliver accurate parts with consistent repeatability. Besides that, it offers a fairly large working area, has an open-source design and it’s easy to use and assemble. It’s also compact and has some upgraded features like the Z-axis functionality which eliminates the need to adjust the cut depth during the building process. However, its feed rate is slow and it’s only ideal for making shallow cuts. 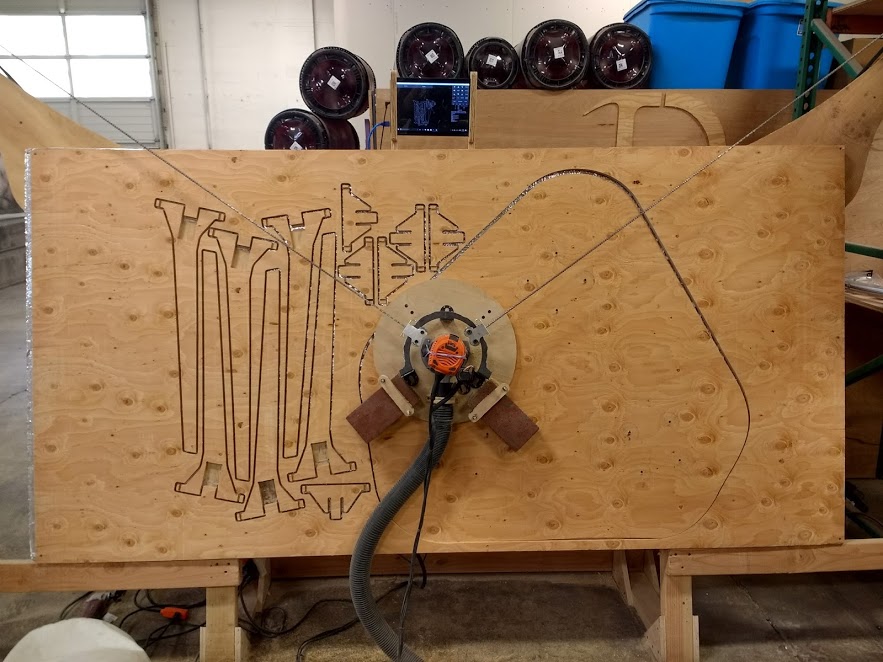 As we mentioned earlier, the Maslow CNC machine offers a rather unique setup. It has a very simple design featuring a work area that’s tilted 90 degrees instead of horizontally like it’s the case with gantry-style CNC machines.

There’s no worktable, just a wooden default frame that’s designed by Maslow’s community itself. The motion system is equally unique. It utilizes tension cords on pulleys and two variable length chains which slide a sled mounted router (held tight with two bricks as ballast) on a flat workpiece.

Maslow’s Arduino processor and the daughterboard do the computing and issue instructions to the small closed-loop DC motors and the gearboxes to move the chains which in turn move the router around in all three axes; X, Y and Z.

With the chains and the tensioners suspended in the air, the stepper motors require minimal effort to move the cutter across the surface area of the workpiece/cutting material. The other benefits of this chain-driven system are that it’s stronger compared to the gantry-style system, and you can easily scale it up or down by just changing the size of the frame and the length of the chain.

However, several users did mention that the tension of the cables is not always constant resulting in some sort of bungee/elastic cord setup. Nonetheless, it was constant for most users and they reported that the motion system appears to work pretty well.

In terms of size, the Maslow CNC machine may be a bit long, measuring about 12 inches. It’s narrow though which translates to a small footprint and the fact that it’s tilted 90 degrees means that you can place it up against a wall to free up space. It can easily fit into most slim and long spaces that can’t accommodate gantry-style machines like garages.

The cutting performance of Maslow is impressive, particularly when doing shallow cuts on the wood. It’s able to produce accurate parts at shallow cuts of around 1/8-inch to 1/4-inch deep. The accuracy variance is about 0.1 to 0.2mm, so as long as you are doing shallow cuts like making smaller signs or parts, you’ll be able to get accurate results.

Cutting long straight lines like 6 or 7 feet will be a bit challenging as it can sometimes produce a bow up to 1/16 inches. You have to keep the cuts close to the center of the working area in order to get best results.

The unit is able to cut corners accurately provided that it’s well-calibrated. However, because of the non-Cartesian working space and the fact that it relies on gravity, it might be prone to calibration errors. It may have slightly different errors at different positions in the workspace unless you get it calibrated perfectly. Even so, you can still end up with slight inaccuracies in several different parts of the work area.

The good thing is that it’s an open-source machine which means you can further improve results with more tuning of its controller software or upgrading some of the parts.

You’ll find the Maslow CNC quite slow, especially if you have experience with other CNC machines, particularly, gantry-style CNCs – the feed rate varies between 20 – 30 inches per minute.

Cutting out a piece that’s about 26-inch long from an 11/32 plywood (with two passes) can take around 7 minutes. You might also not be able to cut through most workpieces in just one pass. For instance, it would take like 3 or 4 passes just to plough through a 3/4-inch piece of plywood.

Dragging a router that’s held down with bricks and the fact that the unit uses tiny motors, chains and gears seems to significantly limit its speed.

Another key limitation is the Arduino processor that it uses – it’s not able to keep with high speeds. Besides that, the tiny motors and reliance on gravity simply doesn’t provide enough torque to facilitate a fast feed rate. Pushing too hard (beyond 35 inches per minute) or cutting too deep just adds more resistance and also results in less accuracy.

However, considering that it’s an open-source machine, you can upgrade the spindle RPM, and torque, and even broaden its cutting capabilities to enhance its feed rate and overall performance.

Despite its compact footprint, the Maslow CNC is capable of cutting a surface of 4 x 8 inches, which is enough to allow you to make relatively large cuts or work with large wooden pieces. It’s ideal for large projects, mainly out of wood material. You can be able to cut 2D pieces of furniture like chairs and tables or even use it for making signs.

Since the Maslow’s sled is designed to ride on top of the workpiece, you can only cut flat sheets. This doesn’t mean though that you can’t cut pockets or 3D contours. You can cut them but your working area must be small enough such that the sled is able to ride around fully supported on the surrounding uncut support material.

If you ride the sled close to the edges of the workpiece, it can fall off and tilt the router bit, unless you hold one side down manually. The accuracy can as well degrade towards the edges. You may have to build a skirt that’s of the same thickness around your workpiece or otherwise, you can’t cut up to the edge.

Even if you build a skirt, the unit still appears to lose control near the far right and bottom left of its workspace. The acute angles on the two chains don’t provide sufficient force to keep the bit stable as the angle of the chains get closer to vertical, which can cause “wavy lines” around these areas.

Nonetheless, the open-source design of the unit and the fact that most, if not all, of its components are off-the-shelf allows you to customize it further. So, instead of being limited to the standard 4 x 8 inches shape, you can get longer cables to enlarge the working area.

Considering that you can use a spindle of your choice, this Maslow CNC machine allows you to work with various materials. It’s durable enough to cut out anything that a traditional hand router can. It can work with plywood, hardwoods, MDF laminate, hard plastics (like acrylic, nylon, hard PVC) and soft plastics (polyethylene, polycarbonate, soft PVC). The only thing that will restrict you is the bit size and the router travel which is 1.5 inches.

The machine is controlled using the company’s software, known as Ground Control. It’s open-source software written in Python language specifically for the Maslow CNC. It’s pretty straightforward and simple to use – you don’t have to be highly-skilled in CNC programming or use any special tool in order to work with it.

You just need to load the G-code file you want to run and then set a few parameters before initiating the milling process. Apart from running the G-code, the software allows you to control the movements of the machine, access calibration tools, manage your cuts and perform other functions to fine-tune your design. You can as well view tool paths of the cut both before and during cutting.

The software is still not perfect though but it continues to be upgraded and improved. Some users did report having some issues with it like how the machine was rendering and machining curves and circles. It tends to cut short arcs rather than smooth carves as you would expect.

It equally appeared to have difficulties reading some G-code files generated by other CAM software such as the RhinoCAM G-code file.  What makes it desirable though is the fact that it’s open-source software and Maslow’s team plus its wide community of users have fixed most of these problems and others discovered by many other users.

Moreover, a new version of the software is often released each week, so if any problems come up, then they will be addressed and fixed quickly. The software can run on Windows, Linux and Mac computers, plus it can work on some tablets too.

Setting up the Maslow CNC is fairly easy but it may require a bit of DIY skills and technical know-how to get it up and running. You have to build the frame yourself and as well cut the final round sled from a temporary sled that you’ll cut by hand.

Depending on which Maslow CNC kit you purchase, the device usually only includes the essential components needed to make the motion system and the sled. You’ll have to source the router, bricks and frame on your own. For this reason, it ships in a small box, so the shipping expenses are significantly reduced compared to gantry-style systems.

The kit may cost about $350 but the total cost can be around $500 if you factor in the additional components you’ll need to acquire. Calibrating the machine will equally require some skills on how to do it although many did attest that it’s not that hard.

You may have to invest in a pair of ear protectors too since the router can be quite noisy and can damage your hearing if you plan to often run the machine for long hours.

The customer support from the company is great and their website has lots of informative materials on how to set it up and start working on it. The best part is that there’s an entire community of users in different online platforms where you can always turn to for help in case you are facing any issues with the machine. They are very helpful and quick to follow up on most issues and offer solutions to fix them as they come up.

Overall, the Maslow CNC is a good option for beginners, hobbyists or professionals that need a budget-friendly CNC machine for woodworking, especially for making furniture, signs or working with large wooden pieces. It’s durable, easy to use and the performance is great for the most part even though it lacks in some areas like the depth of the cut and the feed rate.