The TOYBOX 3D printer is manufactured by TOYBOX labs, which is based in the United States. It’s a very basic 3D printer that has been specifically designed for kids. It’s very easy to use and allows kids to print a wide range of toys while learning the basics of 3D printing.

It’s also fast and produces good quality prints although they are not always well detailed. Setting it up is a breeze since it’s a plug and play printer, plus the company’s customer service is very helpful and they respond quickly. The major disadvantage is that it has a small build volume and the print bed is not heated. You can only use PLA for printing your models. 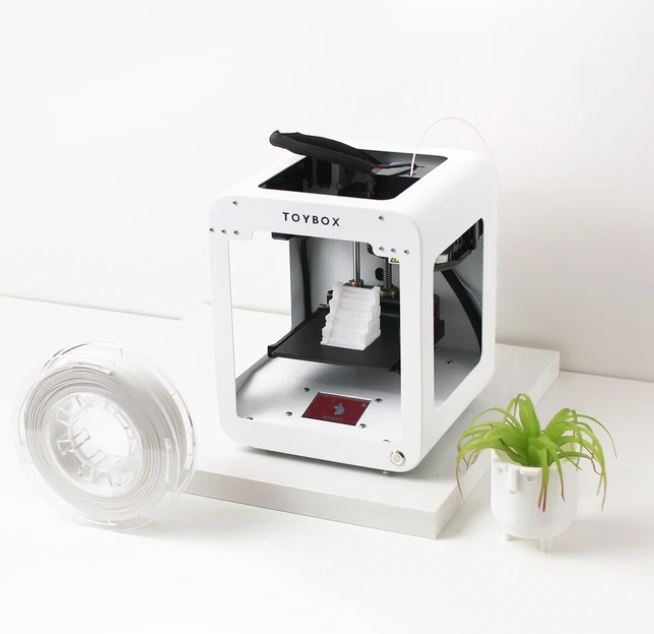 The design of the TOYBOX is simple but quite appealing. It looks cool and modern with a cuboid shape and white body that contrasts well with the black parts and TOYBOX name at the front – it will easily catch the attention of any kid and you can place it anywhere, and it will blend in well. The frame is all metal and it’s partly enclosed at the back side.

The three open sides allow the kids to easily observe the printing process as it happens but it also reveals the print nozzle which heats up to high temperatures. It can be touched easily, making it unsafe for kids to use the printer without adult supervision.

The print bed is a magnetic sheet and it holds securely onto the base plate. The base itself is flexible – you can bend it to slide off the print bed when removing finished prints. It moves up and down along the Z-axis while the print head moves along the X-axis and Y-axis.

At only 9 inches tall and 7.4 inches wide, the TOYBOX is a compact printer that doesn’t need too much space. It’s easy to store and can fit on a standard home desk perfectly. Moving it around won’t be a hassle either as it’s light (weighs just 6.6 pounds).

TOYBOX uses a single extruder with a 0.4mm nozzle that’s able to heat up to a maximum temperature of 220°C. The layer resolution is, however, fixed at 200 microns, which is pretty standard for most small printers although it limits the level of detail you can attain in your prints.

You do get good quality prints for the most part, especially when printing basic toys or other simple 3D models.  There are some minor layer bonding issues though and the thick layers are a bit obvious but don’t usually affect the look that much.

The printer seems to struggle with some fine details too which can affect the playability of some of the prints. Some users reported printing clips for holding the wheels on a printed train but they were not well-formed causing the wheels to sometimes stick as they go around, or even fall off in some cases.

The printer can print at a speed of between 20 to 60mm/s which is fairly fast. A 3-inch object like a Thinker print can take about 1 hour and 45 minutes, while a Halloween jaunty pumpkin can take just slightly over an hour to print, so the munchkins won’t have to wait too long to get their toys. They can print many objects for daily play.

The ToyBox can’t make large prints which is no surprise considering its compact size. The build is just 3.5 x 3.1 x 3.9 inches, hence you can only produce prints that are slightly over 3 inches tall. It’s still, though, a suitable size for the intended purpose which is printing small toys.

If you have to print anything that’s a bit large like a train track then you’ll have to do it in small parts – for the case of the train track, it can be printed in 2-inch lengths which are then fit together to produce a 4-inch train track model.

Toybox has a non-heated print bed which means it can only work best with PLA filament. However, prints don’t always stick to the bed and sometimes they become a stringy mess. You can expect several print fails unless you use some tape to aid in adhesion for the first layer.

On more than one occasion, users reported that a goopy lump of melted filament tends to get stuck on the extruder’s nozzle causing it to clog if not pried off.

The ToyBox printer supports only PLA filament. It’s the most common material available in the market making it easily accessible and the printer even comes with a sample PLA filament to get you started. ToyBox also sells their own proprietary PLA filament for this particular printer – it’s manufactured from corn and it’s non-toxic and biodegradable.

The filament comes in 0.5-pound reels that cost around $10 each and fit right onto the back part of the printer. Despite the reels being smaller, you can still use generic 1.75mm PLA filament but you’ll have to figure out a way of feeding it to the printer.

You can control the ToyBox printer in three different ways, from the printer itself using the LCD touchscreen, from the website or the ToyBox app. The whole system has been basically designed to enhance ease of use, which is essential for the target users which are children.

The small LCD touchscreen allows you to control the machine offline. It shows the printer’s status and provides a simple interface with a menu that allows you to perform certain functions like to load filament, setting up the printer and configure several other basic settings.

The ToyBox’s official website (called Make.Toys) also offers a simple-to-use interface from which models can be selected and printed. You can configure prints, create print files and send them to the printer via the Make.Toys online service. You can modify the available models on the website, upload models found on other sites or create your own models.

The app, on the other hand, allows you to print and create models straight from your mobile device. It’s super easy to use and it has all the functions available on the website. The interface is easy to understand and you can upload or draw your desired toys.

What makes the printer even more appealing is that ToyBox offers a large library of free toys on both its web platform and the app. The library is ever expanding as the company adds new toys weekly, so kids have a huge collection of designs to play around with. They can as well draw their personalized models or tweak existing models using the online editor.

This machine needs an internet connection to print. It only offers one connectivity option which is over 2.4 GHz Wi-Fi. You have to set up an account online in order to control it either via the web-based platform or the mobile app.

The fact that you can only connect via Wi-Fi is inconvenient because you can’t print offline and there are equally reports the connection isn’t always reliable and stable. It can take several attempts to get the printer to connect to a phone.

Like we mentioned above, the ToyBox utilizes its own slicing software which is accessible via their website or mobile app. You can’t use third-party software but you can upload models/3D designs from other sites or create them using computer-aided design platforms and then upload them on the Make.Toys online service.

The supported print file formats are .stl and .obj, and the mobile application can work with both iOS and Android devices – it can be downloaded from AppStore or Google Play.

The app, however, faces a few issues. For instance, when you print a single sample, the machine keeps loading errors during the second output meaning it can’t handle multiple jobs. Another disadvantage of the app is that it can lose records of toys you’ve printed before.

Another omission is that you can’t stop the print midway on the phone itself. The only way you can stop it is by plugging out the printer’s power cable or hitting the stop button on the web interface which can take several seconds to take effect. Also if there’s a problem with the object, the system warns you but cannot fix it.

Setting up the Toybox is incredibly easy since no bed leveling, no calibration and no assembly is required. After unpacking it, you just load the filament and connect it to your computer or smartphone via Wi-Fi to access the web service or the app. The printer is fairly noisy while running but not too loud to cause much disturbance.

Another advantage is that the customer service is excellent. Not only do they respond quickly to customer queries, but they also walk you through the troubleshooting process in case of any issue.

The ToyBox would be a great pick for any parent that’s looking to add some creative angle to their children play. It’s designed specifically with children in mind. It’s very easy to teach kids how to use it even with no background knowledge about 3D printing and can deliver many colorful, simple and fun toys that they will be excited about.

The printer is not perfect though due to the limited build volume and the fact that some prints tend to fail as a result of the un-heated print bed. It does require adult supervision too since the hot extruder is exposed.