It’s very compact, has an all-metal extruder nozzle that delivers decent quality prints, features a heated bed with a special pad to enhance layer cohesion, and it supports different filament types. Besides that, it’s easy to use, offers three connectivity options and it’s compatible with different operating systems and 3D modeling software.

However, it has a small print bed and the printing speed is quite slow. 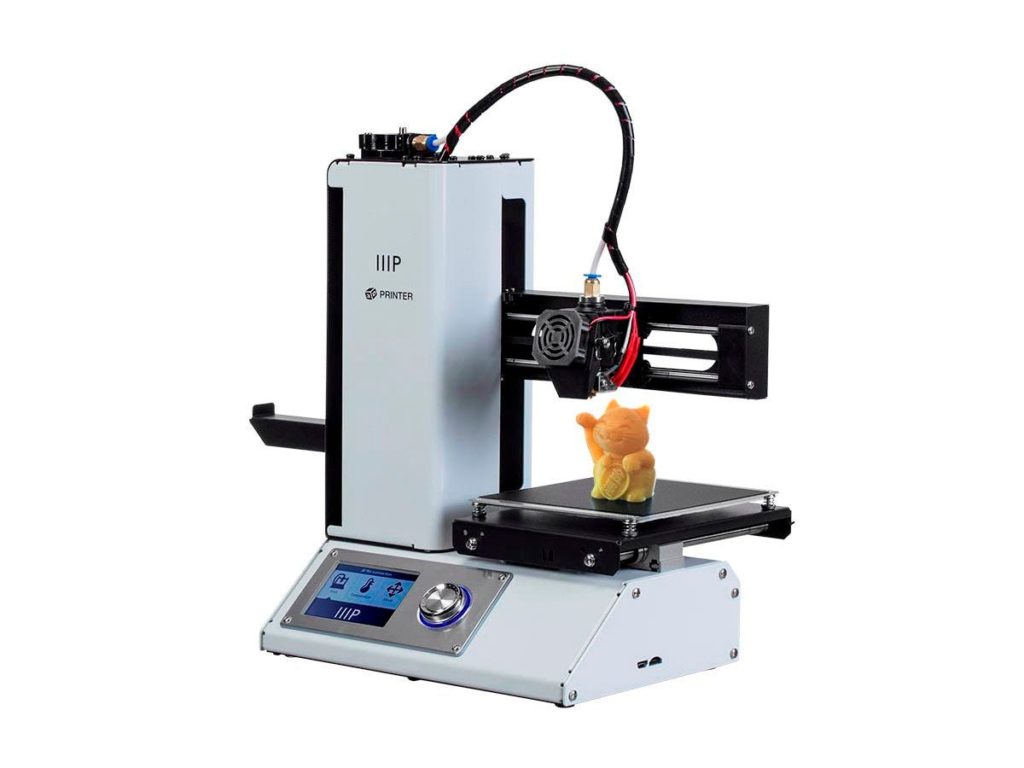 Monoprice is a reputable 3D printer company and the Select Mini V2 is one of its budget models that has been well-received in the market due to its several improvements and additional features that put it a bit ahead of other 3D printers in the same price range.

The Monoprice Select Mini V2 printer has a small footprint. It measures 13.5 x 11.3 x 7.5 inches. It’s a compact unit that can easily fit on any table or desk, making it convenient for use at home, office, or school.

Along with that, it has a clean design featuring a brushed aluminum finishing. There are no loads of cables hanging all over the place – they are all neatly stored within the printer’s structure.

The whole unit has a formidable build – it’s a robust all-metal construction. The machine is sturdy and durable. It doesn’t wiggle around a lot during printing, and it’s not likely to warp quickly with time.

However, it’s a bit heavy since it’s mostly made of metal, weighing around 10 pounds. Lifting and carrying it around takes some effort, but its small design makes it highly portable as you can place it anywhere.

There’s no casing. It’s an open-frame design printer; hence you get to see how the prints get built, which is great when showing students or first-time users how the printer works. The downside is that the build plate is exposed – it has no protection. It can easily warp or break if the printer drops.

Moreover, both the plate and extruder get hot, and since they are not enclosed, they can cause injury if touched. Some also claimed that the power cord is not durable – it glitches over time.

The unit uses a single extruder that feeds the filament to the hot end through a Bowden cable. It’s a spring-loaded, quick-release extruder with a stainless steel gear. The nozzle is all metal to help improve heating and prevent the filament from clogging. It can heat to temperatures of up to 230°C (448°F) and has a diameter of 0.4 mm.

The maximum layer resolution is 300 microns, which is pretty decent for the price. Most users attested that the prints’ quality is consistently good. They come out looking pretty much exactly as designed, plus the printer seems to handle different shapes of objects well.

Some did mention that some layers, intricate details, and sharp edges are less polished or are not always replicated that well when printing irregularly-shaped objects.

Printing speed is slightly slow, as well as the Z-axis or vertical movement. Its maximum speed is 55 mm/second, which is almost half as fast as its rivals. It’s even slower when more microns are selected.

The Select Mini V2 is equipped with a heated build plate. It’s a little underpowered (supposed to reach up to 60°C), and there are even claims that it has a hard time going past 55°C. However, it comes with a special pad material (builder’s tape) that you place on the top of the bed to enhance adhesion during printing.

It does a good job at keeping the layers cohesive and helping the print stick together, even with odd shapes. It’s also simple to remove the finished print from the bed because it doesn’t stick.

While the V1 model had only one fan placed in the extruder, the V2 comes with two fans, one set in the extruder and another on the heat bed, which help regulate the temperature of both parts.

The bed has an auto-leveling feature and magnets in all corners that help to fix it correctly. It’s pretty rigid with the addition of the extra pad on the top, but the pad doesn’t appear to be durable. It degrades fast with prolonged use, leading to failed prints if you don’t have an extra roll of tape at hand to replace it on time.

The build area’s size is in the smaller end, measuring just 120 x 120 x 120 mm. It’s about the size/height of a coke. You can only do small-scale projects as it only creates miniature prints. If you need to create larger items, you’ll have to break down the overall design into small sections and then combine all the finished prints afterward.

This Monoprice printer model doesn’t require a specific type of filament. The heated bed and the broad range of extruder temperatures enable it to print with a relatively large variety of filament materials.

It works with any standard 1.75 mm filament type, including ABS, PLA, TPU, and even more advanced options like conductive PLA, metal and wood composites, or dissolvable HIPS and PVA.

You can also use a proprietary filament, which is another factor that gives it an edge over several high-end 3D printer options. The only materials you can’t use are exotic filaments with higher temperatures. There were reports too that the print head takes a long time to get hot enough to print ABS, especially if you have a fan in the room.

Operating the printer is easy, even for a beginner. You can control it either with a PC or using a built-in screen. It’s equipped with a colored 3.3-inch touchscreen that has simple controls.

The interface is user-friendly, and there’s a clickable spinning wheel for navigating the menu, which is structured well to make it easy to read. You can control almost every aspect of the print directly from the screen.

You can perform calibration, load the filament, pre-heat the extruder hot end, and adjust its temperature based on the printing material you want to use. The unit also features a Z-home micro switch, which keeps it from lowering the head to prevent crashing into the build plate.

However, you have to manually adjust the distance between the nozzle and the print bed when the printer has lost its level across the bed. The bed also takes up a lot of backspaces such that when it entirely moves to the front, it tends to block access to the screen.

There are different options to choose from when it comes to connectivity. You can use a micro SD card, print from a USB drive, or connect any device via USB. Wi-Fi connectivity is also included allowing you to connect wirelessly to the printer using a mobile app that’s provided by Monoprice.

The Select Mini V2 is compatible with Windows operating systems as well as MAC OS and Linux. It works with various 3D modeling/slicing programs such as Cura, Simplify3D, Repetier, and other software.

It can also work with standard open-source 3D printing programs hence allowing you to create unique projects based on your personal preference. It supports .gcode file format but can convert from.OBJ or.STL.

There’s little installation to do. The printer comes fully assembled and pre-calibrated from the factory. The only thing you have to do is to insert the filament rack/spool which is straightforward and there’s a manual that illustrates all steps with photographs, not drawings.

That’s the only assembly required other than adjusting the extruder height and plugging the power cord. The package also includes a micro SD card with pre-installed 3D models along with sample PLA filament which allows you to start printing right away.

Users, however, found the printer a bit troublesome to disassemble when doing general maintenance as it contains a lot of screws. The extruder hot end is also prone to jamming because of a gap between its heat break and the PTFE tubing feeding directly into the heat sink.

There were many complaints too that the machine is quite noisy when it operates as the fan runs at 100% throughout and there’s no enclosure.

This is a great option if you want an affordable and quality open-frame desktop 3D printer for doing small 3D projects. It’s powerful, versatile and the print quality is consistent for the most part. It’s a nice option for beginners, students, and even professional users. It has a sturdy, compact build and comes with a one-year warranty, plus 30-day money-back guarantee.