The Maker Ultimate 2 3D printer is manufactured by Monoprice, a company based in the United States. The printer produces good print quality and can work with a wide variety of materials. It’s fully-enclosed and comes with some very useful features like internal lighting, removable heated build plate, filament run-out sensor, door sensor and an automatic bed leveling.

It’s easy to use and to set up, plus it’s compatible with most of the common slicing software. Despite having these amazing features, the Maker Ultimate 2 still has some major downsides like its printing speed is very slow and it’s quite noisy. 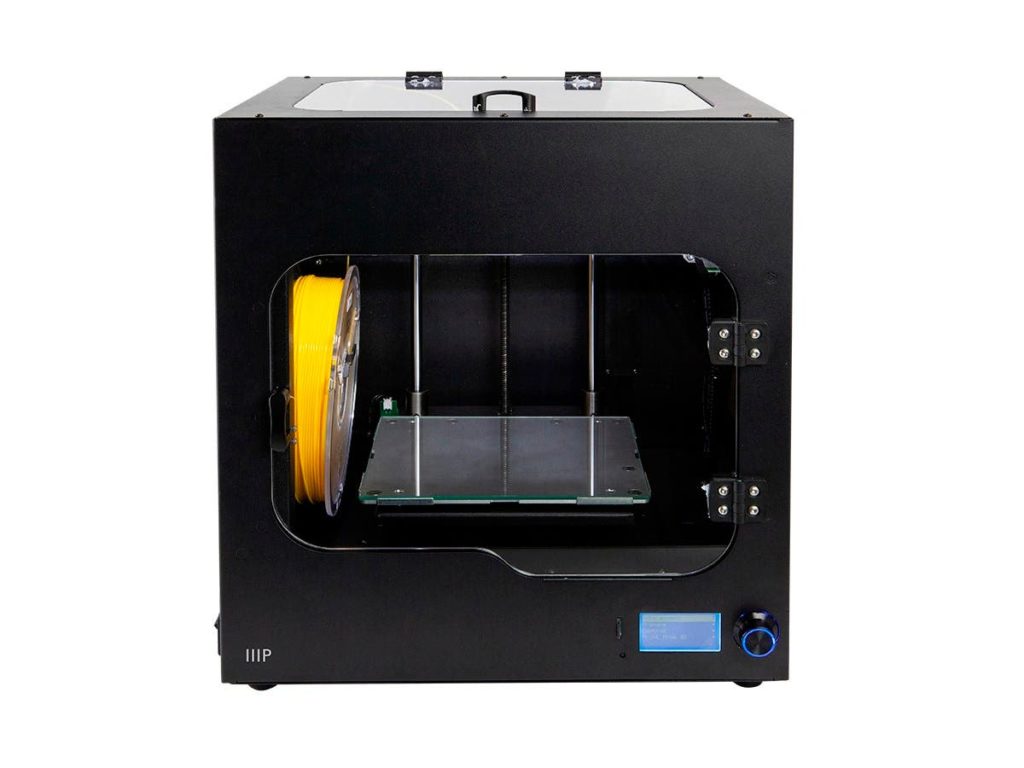 The Maker Ultimate 2 has an industrial look made of heavy, black, anodized metal in the shape of a cube. It’s aesthetically appealing and its enclosed design gives it a neat look since there are no hanging cables or wires.

They are all hidden within the enclosure including the filament reel which is essential as it helps keep moisture and dust off the rolls hence minimizing nozzle clogs. It’s a fully-enclosed cube that makes the printer safe to use around small children.

The frame is made entirely of metal. It’s robust and rigid enough to keep the printer steady when the print head and the print bed are moving. The lower part is fitted with rubber feet that equally help absorb vibrations that may occur during a printing process.

Generally, everything is quite organized inside and outside the printer, and the overall build quality is clearly great including the print head, which is made of heavy metal with a brass nozzle.

The print head itself moves smoothly in X and Y axis on two machined rods using linear bearings. The print bed only moves up and down in the Z-axis.

The inner supports for the print head, motors, bearings, rods and limit switches are all made of plastic (probably ABS). They are strong and seem like they can hold up well for long.

The unit has two opening doors, one on the front and the other on the upper part. These doors are made of methacrylate and they’re transparent, so you can view and monitor printing at all times, although you don’t get to see the print from all the angles like in an open-frame design.

The unit also features a row of small LED lights inside the enclosure on the front part. They illuminate the prints allowing you to easily view the print in low light conditions – you don’t have to use a flashlight or any other spotlight.

The entire printer measures 15 x 13.4 x 16.5 inches. It doesn’t take up much space making it suitable for use at home or in an office environment. However, it’s heavy, weighing 33 pounds, but moving it isn’t much of a challenge due to its compact and enclosed design.

Maker Ultimate utilizes a direct drive extruder with a 0.4mm nozzle that provides a layer resolution of 100 – 400 microns. The nozzle can reach a maximum temperature of 356 – 500°F (180 -260°C). It can print with different types of filaments including flexible materials like TPE and TPU.

The overall quality of the prints is okay. The direct-drive extruder combined with the enclosed design makes the print results much more reliable and consistent. You get decent prints with a variety of materials, especially PLA, PET and ABS. Items usually print true to size and are well detailed.

Stringing, however, is a major issue which is caused by the poor cooling system. The fan does not blow air properly onto the fresh print; instead, it just blows air a few centimeters to the right part of the print, so the air is not usually directed to the required place which leads to stringing and can as well sometimes cause the print to warp.

In terms of speed, the Maker Ultimate 2 is a bit slower compared to other similar 3D printers. It can take about 16 hours 40 minutes to print a 4.5-inch object using the PLA filament at a layer resolution of 0.1 mm. A similar print on the XYZ Da Vinci printer takes about 14 hours 13 minutes which is faster than the Maker Ultimate 2.

The print bed is 7.9 x 5.9 x 5.9 inches, which is certainly not a larger volume, but it’s just more than enough to accommodate most of the common/simple prints that usually range from small to medium size.

The print bed is glass and it’s attached to a metal plate at the bottom by magnets. You can easily remove it from the plate once the print is completed by just lifting it off.  The plate has been flattened to precision to ensure prints come out as intended. It’s heated up to 100°C which means it’s able to handle filaments like ABS.

The enclosed design is another advantage as it helps keep the temperature consistent inside throughout the printing process, which is essential when printing filaments prone to warping such as ABS and ASA. There’s even a sensor fitted on the door that detects when it’s opened causing the system to automatically stop the printing.

The heated print bed does provide good layer adhesion for ABS and it’s prepared with bodybuilder tape that seems to work well for other filaments.

The printer also comes with a masking tape which is essential because we encountered reports that the bodybuilder tape stops sticking after a few print jobs – the prints come off the bed often, even at moderate print speeds if you don’t apply the masking tape evenly and across the whole print bed.

The Maker Ultimate 3D printer is equipped with an all-metal extruder and heated print bed which means it can support a wide range of filaments such as PLA, ABS, ASA, PVA, HIPS, TPE, Metal and Wood. It gives you the chance to experiment with different types of filaments and achieve different levels of print quality.

It has no problem working with third party filaments provided they have a standard diameter of 1.75mm. A 0.5KG roll of PLA filament (white) is provided along with the unit, but it’s also compatible with 1KG rolls, although it’s awkward mounting one inside the case. You have to print a spool holder to mount it externally.

The Maker Ultimate has a control knob and an LCD screen that displays functions you can perform. It lacks a touch screen which is a disadvantage since most printers in the same price range have one. You’ll have to rely on the control knob which is incredibly laggy in response.

It has detents as you rotate it and one detent isn’t equal to one menu selection change – you have to turn three detents for every one selection. Sometimes it even freezes on a particular selection or moves past the one you want to select, which is frustrating as you end up selecting the wrong file almost every time and you can’t cancel a print once it starts since the control freezes.

The display panel is also rather small and placed at the bottom on the front part of the printer together with the rotary control knob. It’s an awkward location for the control panel and it makes it hard to read and use the screen.

There’s a USB cable port that allows you to connect the printer to the computer but it seems you can’t also operate directly from the computer, which is a bit odd. You need to transfer the design or file to an SD card or USB flash disk, put the card into the printer, and then use the printer’s control panel to find the file and initiate the printing process. There’s no Wi-Fi connectivity, you are limited to just SD card and USB.

Maker Ultimate is an open-source machine hence it’s compatible with many slicing software including Cura, Slic3r, KiSSSlicer, Simplify3D, Repetier and PrusaSlicer. You can use nearly any open source slicing software with it.

There are two 3D slicing programs on the provided SD card, wiibuilder and Cura 3.3. Wiibuilder slicing software is sort of unknown as we couldn’t find much about, but it can slice and generate 3D files for offline printing.

The Cura 3.3 is equally an outdated version of Cura, but it’s still adequate. It does its job well in allowing you to slice models into gcode and it equally provides several customization options like scaling or moving where they print. You can’t do much beyond the generic quality parameters unless you update it to the latest version.

Setting up the Maker Ultimate is pretty much straight forward because it comes nearly pre-assembled and it’s also pre-calibrated from the factory.

Only some minor assembly is required such as loading the filament and removing the cloudy protective plastic film on the front and back sides of the two doors which is a little tricky because they have been put on behind the hinges – you must remove the hinges in order to get the plastic film completely off.

Feeding the filament through to the extruder nozzle is equally challenging. The unit features an auto-feed function that’s supposed to automatically feed the filament to the hot end once you thread it through the tube.

It’s not quite reliable as it can take about an hour just to get it to feed the filament and often the filament can get through the feeder mechanism but still miss the nozzle – it either catches on the feed’s lip into the nozzle or bends around in the mechanism.

The good thing is that a filament sensor has been incorporated into the unit to help stop the printer when it runs out of filament. However, there were reports that it doesn’t work as expected – the machine still fails to stop the print once the filament runs out.

As mentioned earlier, this Maker Ultimate 2 model comes fully calibrated at the factory, which saves you the hassle and time you’d spend doing it yourself – there are built-in inductive sensors that level the print bed automatically without requiring much user involvement.

However, the routine performs a 3-point sensing auto-levelling instead of 4-point, which may be insufficient and can result in a slight variation in the height of the nozzle from one section of the bed compared to the other.

Many did confirm though that the sensors work fine and that the leveling of the bed is usually nearly accurate. Nonetheless, like all other 3D printers that arrive pre-calibrated, you’d still have to check the bed leveling because things can easily move around during transit.

With regards to noise, the machine is pretty loud when in operation. The noise comes from the cooling fans on the extruder and the enclosed design doesn’t do much to help dampen it – it’s loud enough to distract you while working if you are printing in the office.

The package includes a sample PLA filament (500g), USB cable, 8 Gb SD card, masking tape and several other items including the setup manual, which is unfortunately not very helpful – it leaves out some important instructions requiring you to rely on YouTube videos.

On customer support, you can contact Monoprice via email or phone in case of any issues whether it’s about set up or use. Many customers reported that the customer support team is fast and often provides effective fixes for specific issues including shipping the replacements for damaged components.

The Monoprice Maker Ultimate 2 is ideal for beginners and can also suit experts looking to experiment with different software and filaments. It’s relatively affordable and does deliver decent prints. It doesn’t handle complex objects well though and it’s printing speed is very slow compared to most other 3D printers.