The CR-10 is a more basic 3D printer when it comes to its design and functionality. It doesn’t have many advanced features, but it’s powerful, and its printing performance is impressive. However, what makes it stand out more is the large build volume it offers, measuring 11.8 x 11.8 x 15.7 inches. It’s larger than most similar standard printers.

The unit is also very versatile. It can print different kinds of filaments, and it supports most of the standard slicer software. However, the bed takes long to heat up and tends to warp. Some parts are not durable either, and there’s no wireless connectivity. The other issue is that customer support service from the company itself is not available. 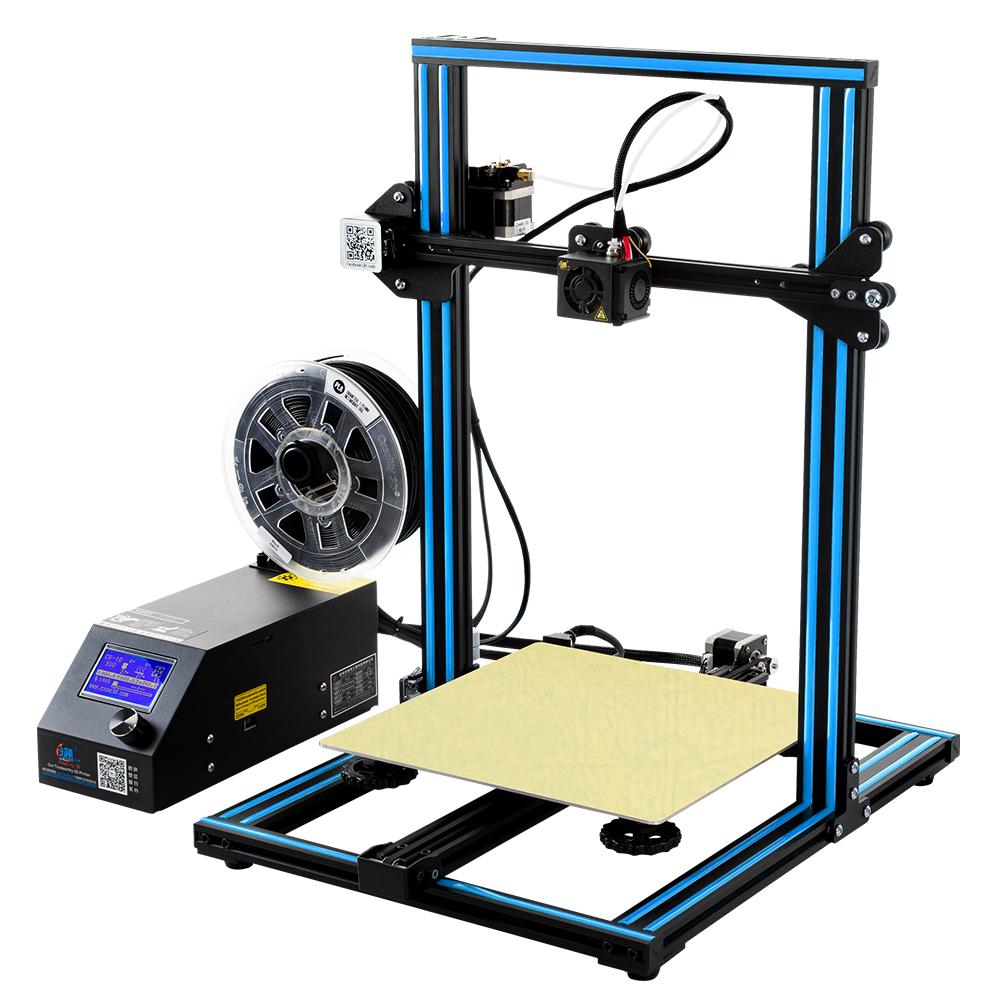 The CR-10 looks unique. There’s nothing fancy about it but the simplicity of its design saves it from appearing too generic. It’s a Cartesian 3D printer with separate independent parts consisting of a control box, spool holder, and the frame holding the printer and the build plate.

It’s a completely open-frame design, meaning you get to view everything as it unfolds. The downside is that the prints are vulnerable to damage, dust, and other elements, and the open frame is not safe around small children since the bed is heated. However, all the cables are secured in the control box and the filament spool holder mounted on top of it.

The CR-10 is also a big 3D printer and it’s not just its large build volume. The overall design expands its footprint, making other 3D printer models look very small. The frame is wide and tall, plus you have the control box and filament spool holder as separate units that have to sit a distance from the frame in order for the filament to feed correctly into the extruder. The whole system takes up a lot of space, and the spool holder can’t be placed at the top of the frame.

The frame on its own is sturdy. It’s made of strong aluminum material with metal brackets everywhere, but the spool holder’s added weight can make it unstable, which will affect prints.

Most of the plastic parts seem quite solid – they are not 3D printed. However, some of the essential parts of the printer don’t last long. The heating elements and the wheels on the bed are susceptible to breaking over time, while many also reported that the bed tends to warp quickly.

The printer utilizes a single Bowden extruder system with a nozzle diameter of 0.4mm, which can also be interchanged with 0.3mm and 0.2mm nozzles. It has an adjustable layer resolution ranging from 0.05 to 0.4mm and can achieve maximum temperatures of 482°F (250°C).

The extruder is wired correctly and screwed in place. The slot bearings move smoothly, and the bottom of the frame features rubber feet/pads that help minimize vibrations and keep it stable. The frame supports all the z-axis movements as the V wheels go up and down the tracks.

The print head of the CR-10 moves along the x-axis only while a single screw drives the rail; hence it has the mobility required to create complex objects.

The print quality is impressive, especially when making large prints using PLA filament. The system can complete most of the complex designs like a large Eiffel Tower without failure.

The overhangs are formed well with no drooping, bridging all completed without any issues, and the edges are nicely sharp and clean. Even at low settings, it still manages to produce models with good print quality. You also get smooth and high detailed prints from small designs, and taller objects usually have no Z bending at both moderate or higher print speeds.

There’s some ringing or layer skipping during the initial prints, but it isn’t a widespread problem. The major downside is that the preparation before each print takes a while and can be a hassle.

The print bed heats up slowly (takes around 10-15 minutes), and you always have to check on the bed calibration before every print to ensure it’s properly levelled. Printing of materials that are susceptible to warping or highly sensitive to temperature is out of the question due to the open-frame design and the inability of the print bed to maintain a consistent temperature.

With regards to print bed adhesion property, the CR-10 package includes a roll of painters tape and large individual sheets of the stuff too. We found the printer’s glass bed with a spray of the print adhesive to be quite effective at keeping prints sticking to it.

The sprint speed isn’t great either. The smallest print can take from a few minutes to about 2 hours, while large, complex objects can take more than a day to complete. The more large-scale and complex the object, the longer it will take to print. You can run the machine at really low settings to boost the speed. However, the quality of the object might not be impressive.

The good thing, though, is that the unit has long operation hours. It can work continuously for more than 100 hours, which allows you to do large projects or long, intricate prints that can take up to 40 hours to complete.

The CR-10 has a large print area, which is its biggest advantage. It measures 11.8 x 11.8 x 15.7 inches. Few other printers in the same price range offer such a large build volume. You can print larger and much complex 3D models from lampshades to coat hangers to towers.

The bed is made up of an aluminum PCD platform, and a glass board sits on top of it. As we mentioned earlier, it does take a while to heat up, and it doesn’t reach its specified maximum temperature of 100°C.

It reaches only up to 70°C mainly due to the open-frame design, but the heat is distributed evenly across the glass surface once it heats up. There are no heat propagation issues.

The bed isn’t highly durable, though. Several users reported that both the bed and the glass surface tend to warp.

You can use any third-party filament with this Creality printer, provided the diameter is 1.75mm – it’s an open filament system. It mostly produces consistent quality results/prints with PLA.

It handles TPU flexible filament pretty well – the toothed gear is offset closer to the tube, so there are no gaps to bridge like in other Bowden open extruder systems. The prints come out smooth, with the intricate details of designs replicated well.

However, it struggles with ABS and other more advanced filaments even despite having a heated print bed. The bed doesn’t maintain a consistent temperature due to the open-frame design – it heats up to about 70°C, and it’s usually affected by the elements.

Unless you make modifications by creating an enclosure to maintain a consistently high temperature, printing ABS and other materials that are sensitive to temperature fluctuations won’t go well. They often warp and crack.

In terms of connectivity, this model is limited to only a USB cable and SD card. There’s no Wi-Fi compatibility; hence you can’t connect wirelessly to send prints from your laptop or smartphone. You can control the printer directly from the PC via the USB cable connection or the controller box.

The controller box holds the Micro SD card and USB cable slots, as well as an LCD screen with a control wheel/knob that allows you to navigate through the printer’s settings and functions easily.

There’s also a switch placed on the control box that allows switching between 110 and 220 volts power supply hence making the CR-10 printer usable around the globe. One issue we noted though is that the control knob sometimes double-scrolls past your selection, making selecting the menu a bit tricky.

Controlling the printer via a PC (USB Cable-to-PC connection) is simple, but it also has challenges – it sometimes loses connection, almost every time when the computer goes to sleep.

You can save the g-code/model to the Micro SD card and swap it from the computer to the printer for offline or untethered printing. The problem is that it’s hard to get the card into its slot.

There’s a little gap between the actual housing and the SD card slot, which makes it hard to get the card in at all. You end up pushing the slot down and dropping the SD card in there – the gap gets big enough for it to go through, and you have to open the entire box to get it out.

Another notable setback is that you have to auto-home the system every time before starting a new print job. It’s a step that makes the print preparation process tedious, but forgetting it is not an option. It can result in friction between the extruder head and the print bed, leading to irreversible damage to the machine.

The Creality CR-10 is open source too when it comes to software compatibility. There’s no specific proprietary software that it requires. It can work with most of the standard slicer software like Cura, Simplify3D, and Repetier-Host. The file formats it can support are SLT and G-Code, and it’s compatible with Windows, Linux, or Mac OS X.

Set up is relatively simple since the printer comes nearly assembled. You only need to install the support brackets, and tighten a few screws and connect the wires. The provided instructions are not useful. They are blurry and vague. However, the SD card the printer comes with contains a pdf manual with better instructions and plenty of other useful information.

All the tools and accessories needed for the setup are included in the package, including a free filament and a spatula and painter’s tape for helping with the removal of print from the bed.

The wiring is easy. The connectors are clearly labelled. You get to know exactly where to connect each of them. However, the wires that connect the control box and the heated bed are soldered straight to the bed. There’s no real solid connection, which means one of the wires can easily snap off from where it’s attached to the bed due to its back and forth movement.

The filament spool holder is prone to tangling, which can cause print failures but loading the filament to the extruder isn’t complicated. It feeds in and out without any hassle.

There’s no automatic bed leveling. You have to do it manually, and it can be a tricky process at first as it’s a large bed and the screws are little, making them hard on the fingertips. The printer is also a bit noisy when running but not to the point of bothering you at night while sleeping.

As we’ve become accustomed to these semi-assembled 3D printers and kits, the Creality CR-10 kit arrives in a rather plain cardboard box. It’s apparent that one of the ways of cutting costs with most of the “cheap” 3D printers is using decent marketing materials. At least it’d be nice to see a picture of the printer on the box.

We equally noticed lots of shipping problems – many reports of the printer arriving broken or defective (fails to turn on/work). Moreover, there’s no support of any kind or mention of a warranty from the company since third parties mostly sell the printers.

Overall, the Creality CR-10 is a reliable 3D printer when it comes to performance. It’s an ideal option for beginners and experienced users that would like to experiment, particularly with large, intricate designs or different slicing software. It can even work with either 110 or 220 power supply, which is another factor that makes it flexible to use.